Our  2017 Christmas note never went out until  2018, then again on Chinese New Year, and now finally as a blog.

We joined a group of Shanghai American School (SAS) World War II alumni at a University of Michigan symposium.  Mike had been a part of the 1940 SAS boxing  team that prepared hard for their annual match with the British school. 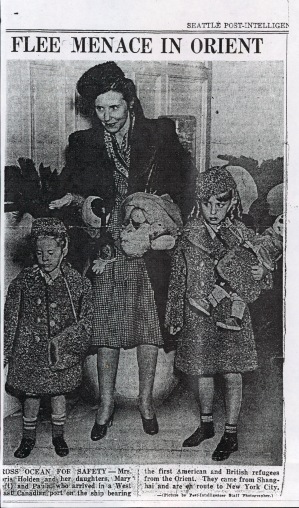 At the same time, in another part of Shanghai, Paula soon embarked with her mother and sister in Vancouver as one of the first families to arrive back in America when the Standard Oil Co. ordered all dependents evacuated in 1940 prior to World War II. I look worried because as we descended the gangway I figured we were being shot by the popping flashbulbs.

Fast-forward 75 years and check out Mike’s fancy footwork. At the age of 85 he joined a group called Rock Steady Boxing after he was diagnosed with Parkinson’s Disease. It involves vigorous exercise over brief periods. Mike is spreading the word that it dramatically improves his energy level.

Meanwhile, Paula Pederson is out there blogging, Facebooking, and speaking as she promotes her memoir, MYSTERIOUS BUILDER OF SEATTLE LANDMARKS: Searching for My father.

Someone gave Mike a t-shirt for his 75th birthday that read, “The Older I Get, the Better I was.”  NO WAY!!!  Keep on truckin’!