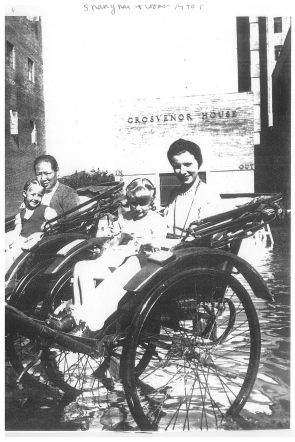 Cookie, Amah, Paula, and Mom ready for a rickshaw ride in Shanghai

Prior to World War II, we lived in the Far East where my adopted expatiate father worked for the Standard Oil. In the photo above, we’re about to take a rickshaw ride through the flooded streets of Shanghai—Cookie in Amah’s lap on the left, and me in my mother’s lap on the right. Rickshaws were fun, I thought back then, but I’ve recently learned more about rickshaw drivers, or pullers, in the April 19, 2017 Delancey Place blog states otherwise. It features a selection from The Search for Modern China, by Jonathan D. Spence.

Everyday life was a struggle for survival for most Chinese in the 1930s. Few could afford to marry, and among those who did, many had to sell their children, or watch them slowly starve. The country was increasingly ready for a revolution.

“China’s hundreds of millions joined scores of their fellows at 4:00 a.m. or earlier, waiting in anxious groups with their tools to see if any work would come that day. Most such men died unnoticed after brief, miserable lives. Some of them ‘escaped’ to the factories or became human horses, pulling two-wheeled rickshaws through the crowded streets of China’s cities. These rickshaw men were constantly exploited by racketeers, and returned after each backbreaking day to grim tenements, where they slept in rows, packed side by side, in spaces just vacated by fellow pullers who had returned to the streets.”

Life was no better for poverty stricken country peasants. “Few of the wealthier farmers went to the expense of mechanizing farm work, even when machinery and fuel were available. Nor did they invest much in draft animals, since the wages paid to a hired laborer per day were the same as the cost of a day’s fodder for a single donkey. The man could be laid off when the need for him was over, but the donkey had to be fed the sheltered for the whole year.”

Such is often the fate of the world’s powerless.