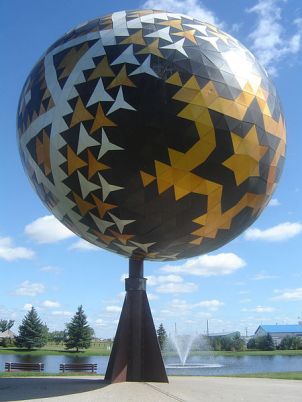 Both my mother’s parents, the Huchulaks, and her grandparents, the Tokaruks, left Ukraine in 1898. Canadian government representatives came to Eastern Europe and urged the people to leave their lives as serfs on overcrowded farms in Bukovina to settle the northern Canadian plains.

They crossed the Pacific on ships to Halifax, then on Canadian Pacific Railroad trains that made such settlement possible. Where they settled the plains in Manitoba, Saskatchewan, and east central Alberta, their onion-domed Orthodox churches served both as places of worship and also as community centers.

I met 50 cousins and their families at a 2009 Huchulak reunion in Alberta. We toured the living history museum and bought Pysanka, intricately decorated Ukrainian eggs, still made by my family members. We stopped for a photo at the giant Pysanka Ukrainian egg at Vegreville. These eggs remain a symbol of new life after the hard winter. In Russia this symbol evolved into the priceless Faberge eggs.

We gathered at the cemetery on the Orthodox Church grounds to meet our forebears. Each gravestone held a Ukrainian cross with a characteristic slanted crosspiece.

Life was hard and often short for pioneer families. At Easter celebrations people brought food and braided bread to be blessed by the priest. After the service families gathered to eat outdoors. Adults brought cakes, fruit, and candy for the children. To this day the custom continues for families to gather at the cemetery on Easter for a picnic — a custom reminiscent of the Mexican  Day of the Dead.

So many of us bury our roots. My Ukrainian Canadian forebears celebrate theirs. I’m glad I’ve been able to add my branch to the family tree.