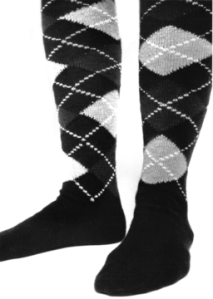 Feeling like immigrants, we moved from New York City to Maine. After high school, I hopped a railroad train south to Smith, a women’s college. Back in the fifties most professors allowed in-class knitting. Argyle socks for boyfriends, vests for our fathers, sweaters too.

We knit in class. We knit in the dorms, we knit in the movies, in the car, and on the train. Since many of us also smoked, back when it was considered healthy—“Light up a Lucky”—knitting was another way to fiddle with our fingers.

Freshman year my father told me, “Take Chemistry. It’s the key to the future.” I hadn’t taken it in high school, but decided I could try out my first pair of argyle socks in Chemistry class,

I managed the first lab. Memorized the periodic table of elements. The classes began to move faster.

I failed the first midterm. I had to tell my father, already smarting over Smith’s tuition, that I would not be holding the key to the future. I told the professor I had better drop the course.

“It seems that Chemistry is not your subject,” she said. ‘But don’t feel too badly. I could never knit those argyle socks.”

I switched to simpler knitting patterns and graduated with a B.A. in English.